As we grow our knowledge of destinations across the world, Savile Row Travel’s Anne spent five busy days exploring all the sights of the Middle Eastern country of Jordan, followed by a quick few days in magical Egypt. With everything from sand-drenched deserts, crystal clear seas and ancient temples, Jordan is an often under-rated destination that deserves to be on your bucket list. Read on to discover Anne’s experience in this wonderful country.

After a surprisingly quick 5 hour flight from London Heathrow to Amman, we landed in the Jordanian heat – very welcome after the British winter! A half an hour drive into the bustling city led me to my home for the night, the InterContinental Hotel, a lovely, modern hotel with a traditional Middle Eastern touch.

After breakfast at the hotel, I joined my tour group and headed out on a city tour of Amman, the capital and largest city of Jordan. This buzzing Arab capital is home to incredibly majestic Roman ruins and archaeological sites, including the Amman Citadel on one of the seven hills which originally made up the city. We walked through souks – exotic, traditional marketplaces – inhaling aromas from numerous herbs and spices, and marvelled at spectacular and elegant mosques dotted around the city. Downtown, we sampled local street food including the country’s famous falafel and knafeh, a traditional dessert made from syrup-soaked pastry, layered with cheese and pistachios. 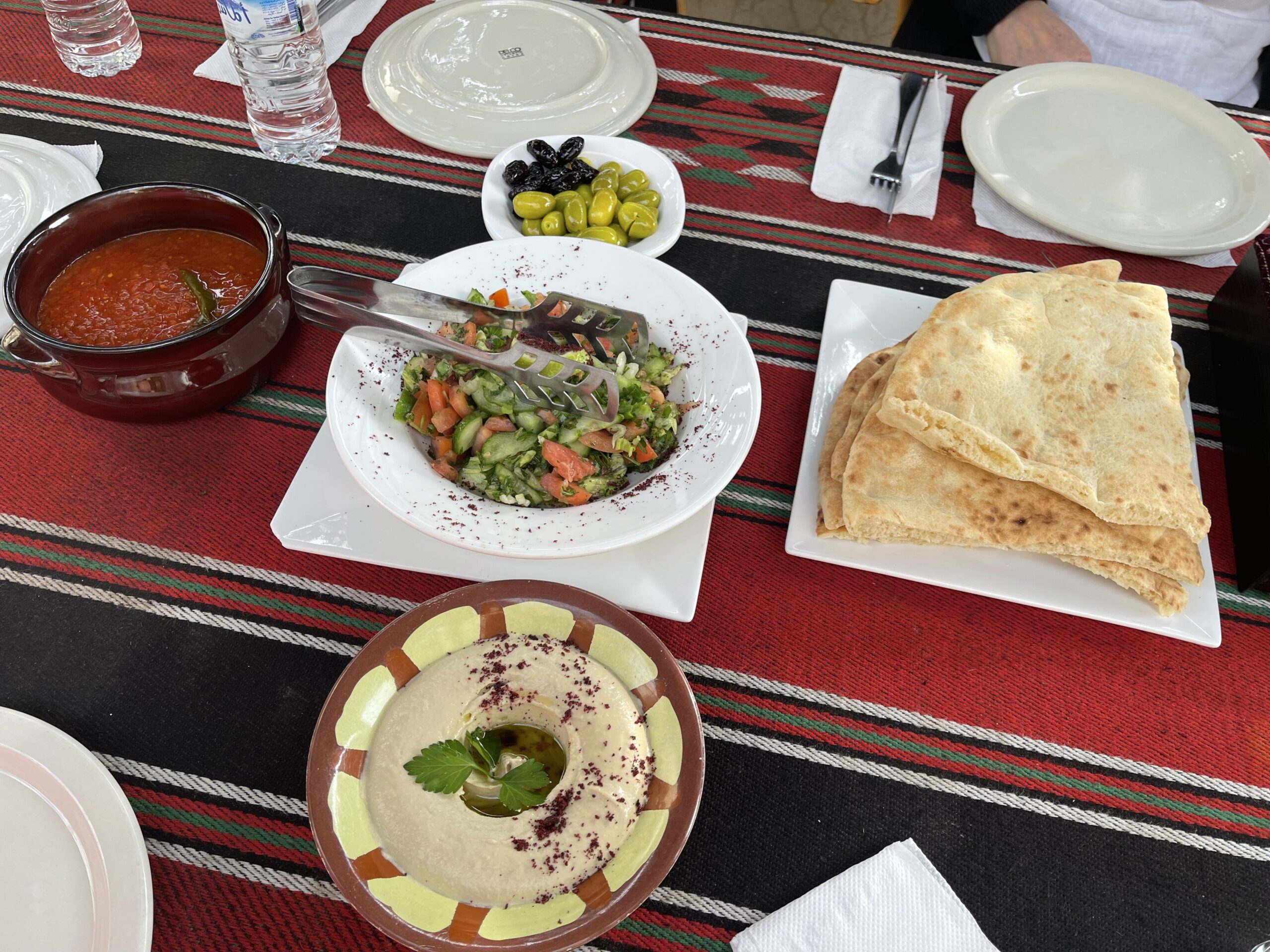 We then drove for an hour to Jerash, an ancient, walled town home to extremely well-preserved Greco-Roman ruins telling the story of life 2,000 years ago. Once one of the grandest Roman cities in the world, it’s also nicknamed ‘Pompeii of the East’ and the ‘city of 1000 columns’. We enjoyed a delicious Jordanian lunch at Beit Khayrat Souf, an inspiring social enterprise run solely by women. It was set up to empower women in the community and create opportunities for them to support themselves financially. The café also sells jams and pickles, handmade by local women. 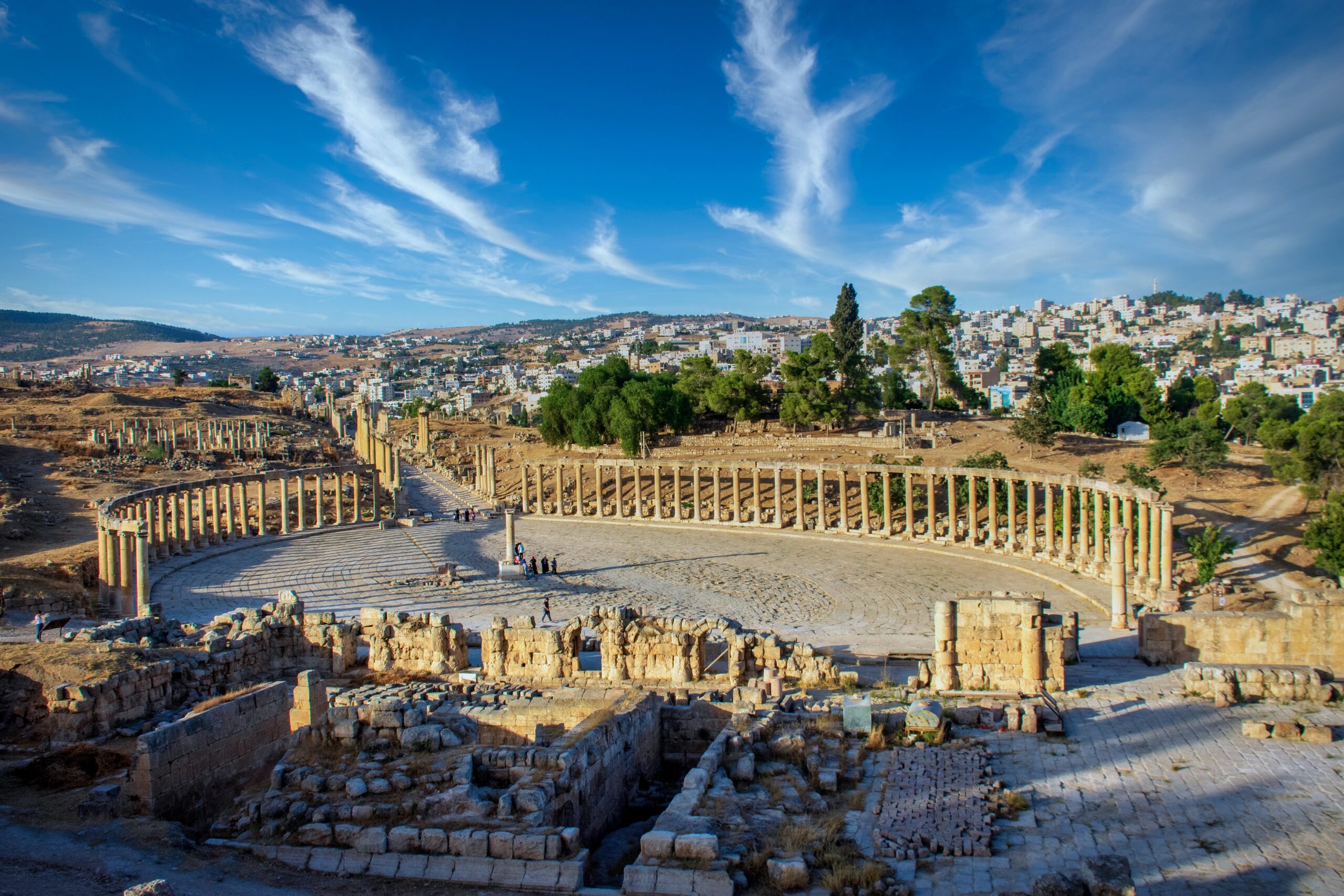 After lunch, we drove to Madaba and freshened up in our new hotel, the Mosaic City Hotel, before a walk to Hikayet Sitti, a family-owned restaurant where we enjoyed a traditional cooking class! Under the watchful gaze of the chef, we discovered all the secrets behind traditional Jordanian food as we prepared our dinner, a meal called Maqluba or ‘upside down’ consisting of layers of rice, vegetables and meat. We had a lovely sit down while enjoying the fruits of our labour, before returning to our hotel for the night.

This morning, we explored the lovely town of Madaba, well-known for its collection of Byzantine-era mosaics. The most famous of these is the ‘Madaba Map’, a sixth century floor mosaic preserved in the Byzantine Church of St George. We also visited the Shrine of the Beheading of Saint John the Baptist, climbing the narrow stairs to the bell tower for incredible panoramic views.

We left Madaba behind for the journey to the Dana Nature Reserve, ready to set out on a 3km circular hike to the Shaq al Reesh Trail, passing through a stunning landscape of unique limestone rock formations, juniper and wild pistachio trees, natural wells and even more small archaeological sites. 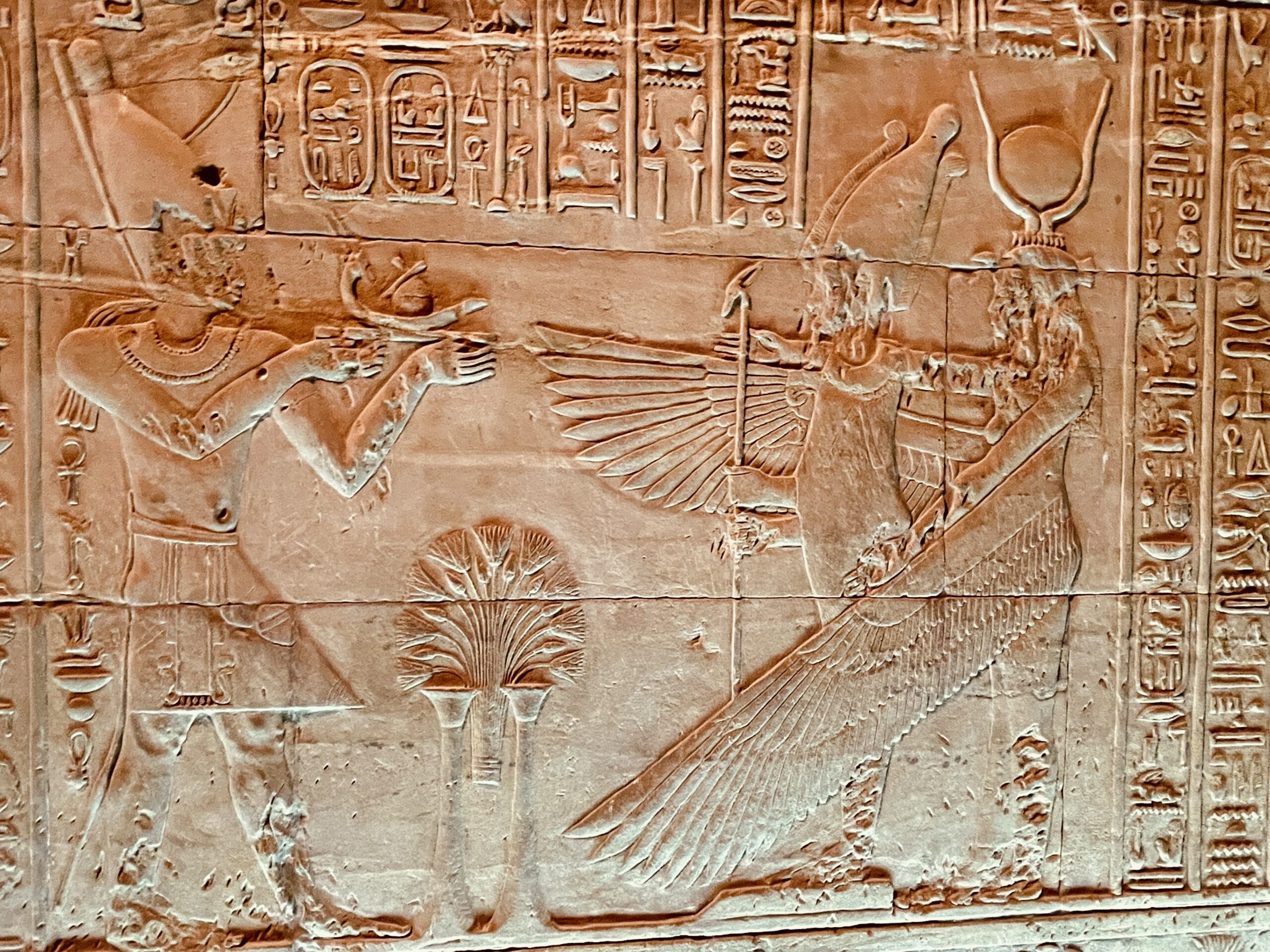 After the trek, we drove onto Petra – probably the most famous site in Jordan! We checked into the Old Village Hotel and got ready for what was supposed to be a magical evening, experiencing the wonders of Petra by candlelight… just as the heavens opened for one of the biggest thunderstorms I’ve ever seen! Obviously, the candles weren’t possible while it was raining so the evening was called off, much to everyone’s disappointment.

We were still able to see Petra though, getting up very early the next morning to catch the sites before the crowds came. I’d definitely recommend getting to Petra by about 7am to get the best experience!

We then headed to Siq al-Barid or ‘Little Petra’, called so because of its similarities to the famous ancient city. It has fewer tourist sites but still overflows with awe-inspiring history. After our visit, we headed back to Petra on foot, an 8km route little known to tourists, that passes through a timeless landscape of desert and mountains, with beautiful views along the way.

When we reached Petra, we carried on our journey by car to visit Wadi Rum, or the Valley of the Moon to experience the adventure and romance of the Arabian desert! We hopped into a Jeep for a two-hour, adrenaline-fuelled ride through the spectacular valley, rising through deep canyons and immense dunes, before arriving at a fixed Bedouin-style camp deep in the desert, called the Rahayeb Desert Camp. We watched a gorgeous sunset over the desert, dining on a traditional Zarb dinner, slow-cooked under the sand, before relaxing into our comfortable tents for the night. 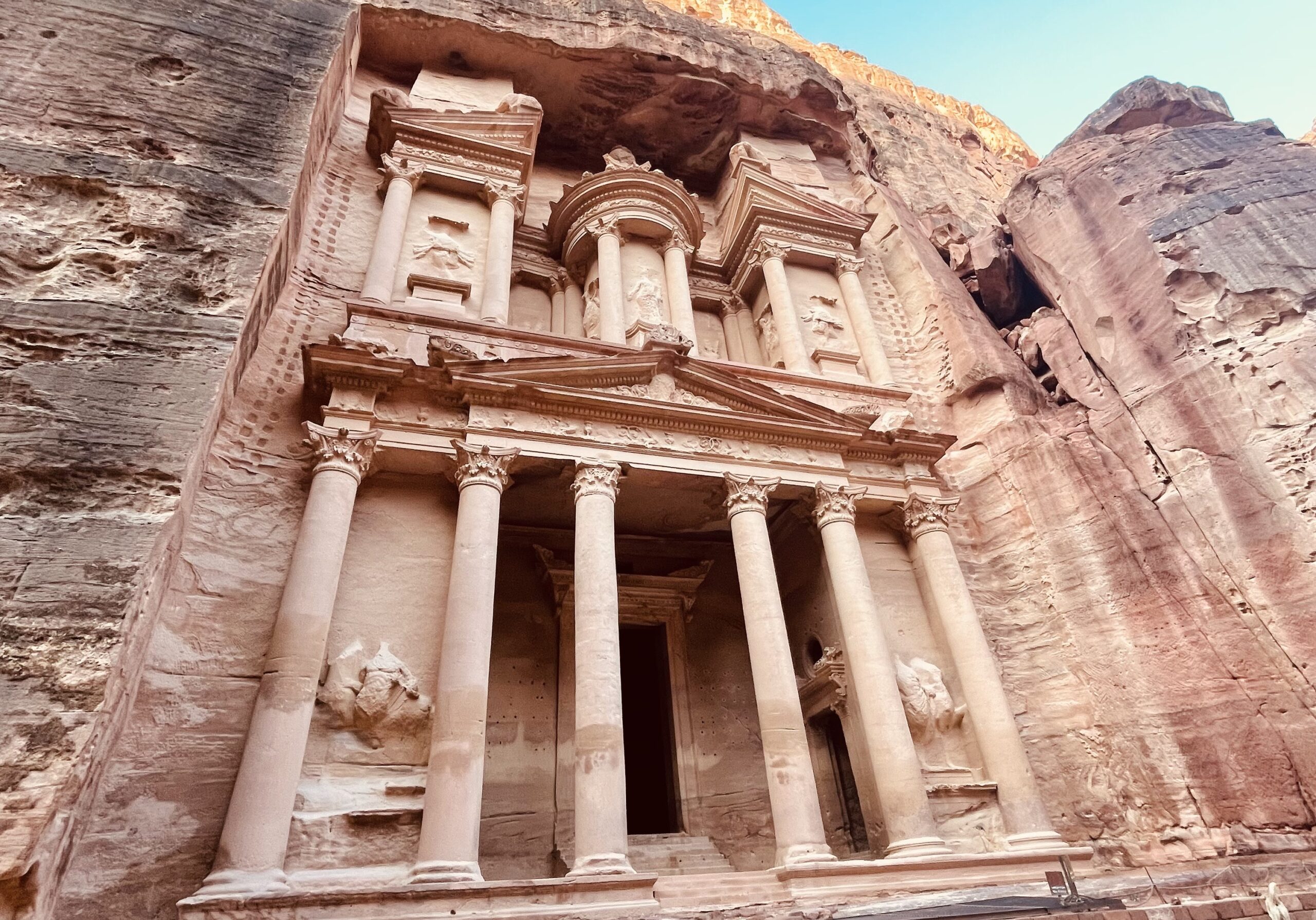 Friday began with a memorable sunrise and a delicious breakfast at the desert camp, before we jumped back into the Jeep for a final ride through Wadi Rum on the way back to the main town. We then swapped vehicles and headed out to the city of Aqaba, Jordan’s only coastal city, located on the shores of the Red Sea. Aqaba is a gateway to the exquisite coral reef and most experiences here revolve around the water, as you would expect. We boarded a boat and floated out for a four-hour cruise on the Red Sea which was relaxing for some and adventurous for others! Most of us jumped into the warm water for a swim and a snorkel, marvelling at the beautiful coral and fishes swimming around us. After a tasty lunch on-board, we headed back to the shore for our journey back to Amman. One final night followed at the InterContinental Hotel, before we boarded our flights the following day. 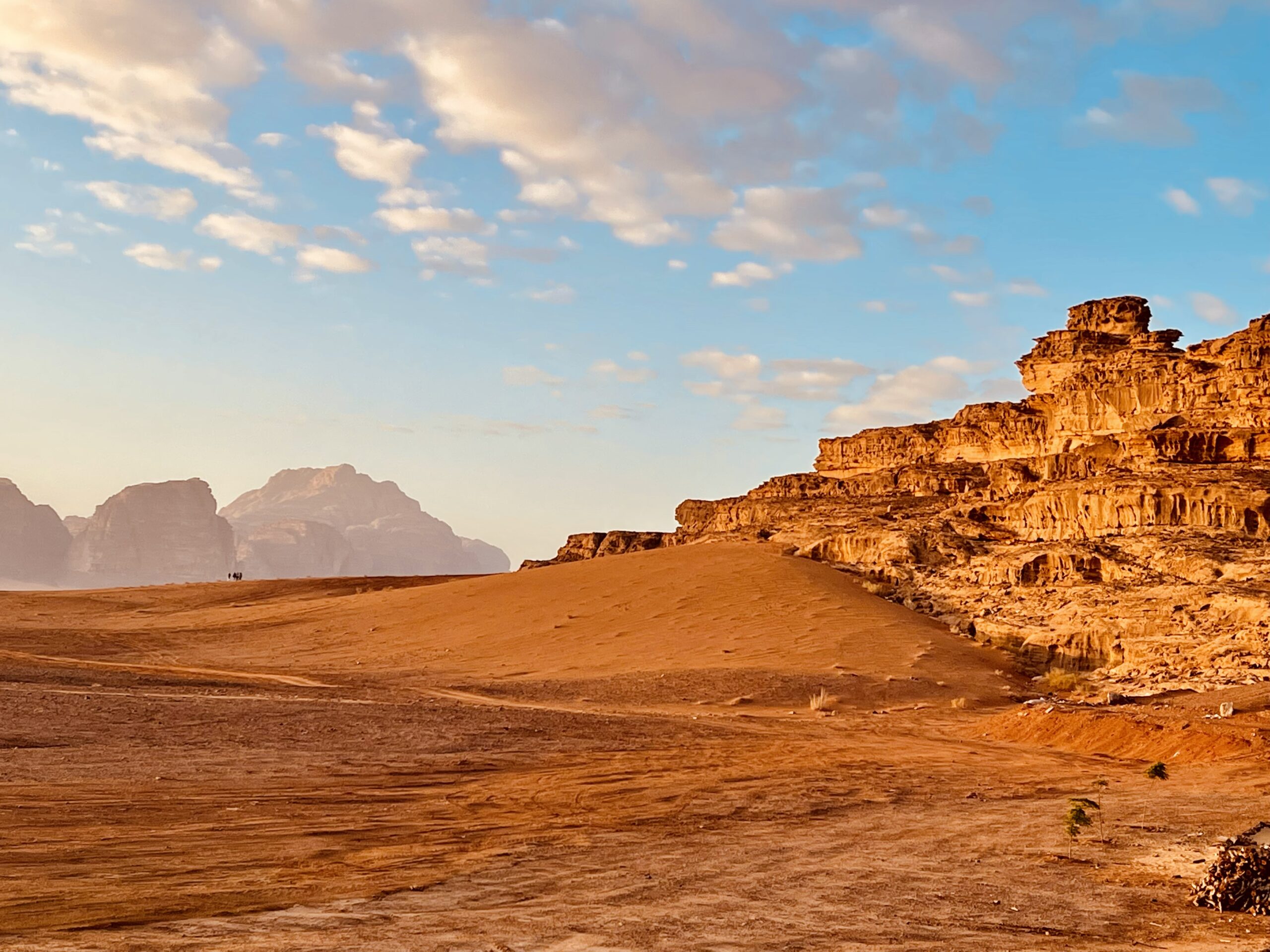 Even though my Jordan adventure was over, I decided to add on a few days in Egypt – a place I’d always wanted to visit! I flew from Amman to Cairo, a quick one-and-a-half-hour flight, and checked into the Ritz Carlton for two nights.

I had two nights in Cairo, just enough time to visit the Pyramids, Museums and the Old City. The three Pyramids of Giza, one of the most famous landmarks in the world and the only surviving wonder of the ancient world, were built as tombs by three Pharaohs of Ancient Egypt about 4500 years ago. The Giza plateau is also home to many other smaller pyramids and temples, and monuments like the Great Sphinx of Giza. 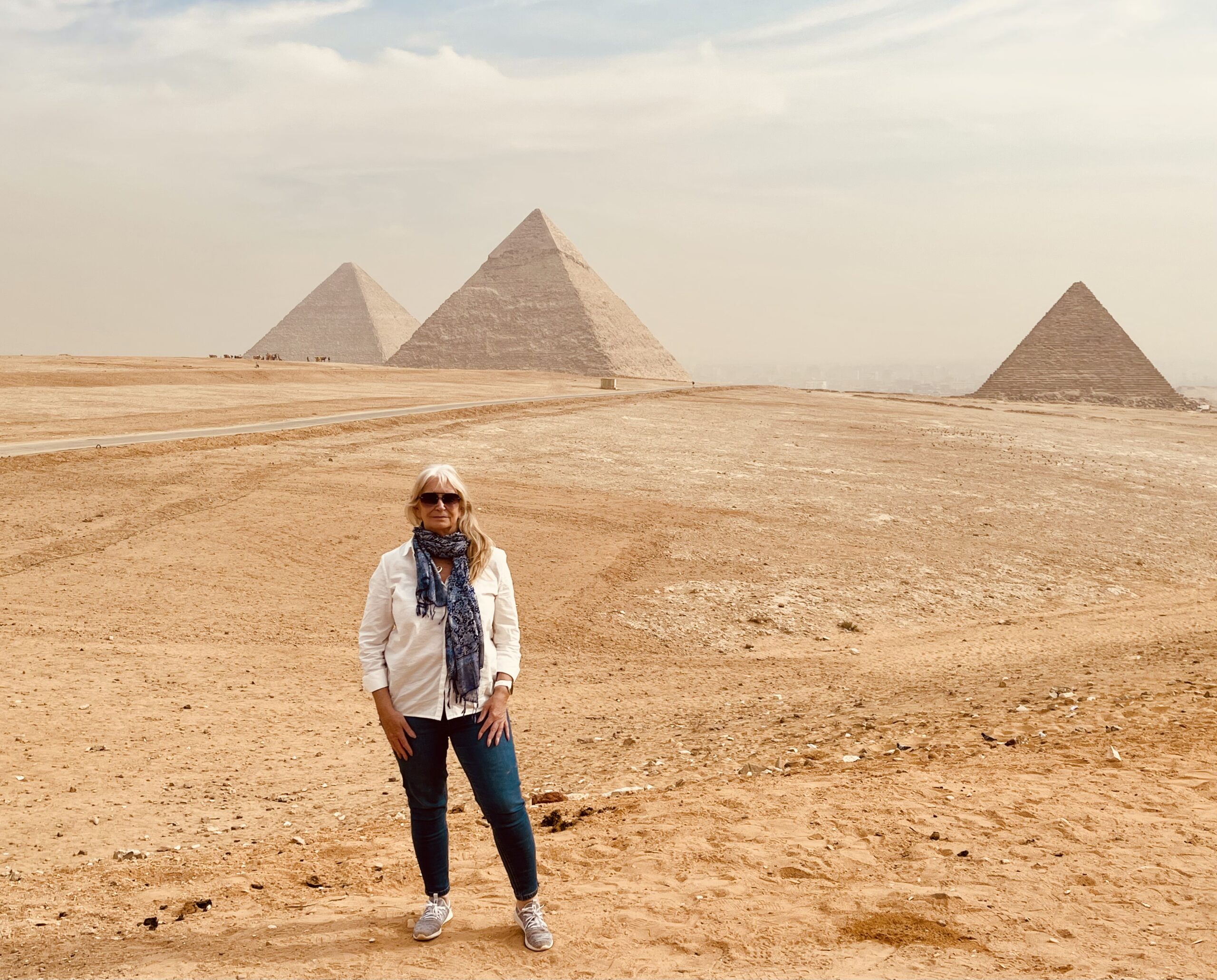 I joined a tour of Old Cairo, the historic part of the city, exploring the Roman-era Babylon Fortress and the Egyptian Christians’ oldest churches surrounding it. Old Cairo also includes the remnants of the cities which were capitals before Cairo itself, such as Fustat, al-Askar and al-Qatta’i. We also stopped for a coffee at the oldest coffee shop in Egypt at the El-Fishawy cafe which opened in 1797!

I then went on to Aswan, a busy market and tourist centre on the East bank of the Nile. Aswan is known best for its stunning views of feluccas (Egyptian sailboats) drifting along the Nile Valley, as well as its many archaeological sites. The Aswan Dam (now known as the High Dam) across the Nile is one of the world’s largest embankment dams, built to protect against flooding, provide water storage and generate hydroelectricity, and was key to Egypt’s industrialisation plans in the 1960s. There are stunning views of Lake Nasser from the dam – well worth a visit!

Although I chose to visit Egypt, it’s also very easy to stop in Israel before or after a trip to Jordan, another exotic country full of fascinating tradition.